A day with Bowser Jr. Wiki
Register
Don't have an account?
Sign In
Advertisement
in: Male, Chararcters, Protagonists

Getting an A-grade in a test, The koopa heir, giving out answers

Waitng, Nerdy, getting an F-grade in a test, feeling betrayed by Bowser, Fawful

Nintendo
"I got an F? What the shell?"

Prince Bowser Koopa the Second, commonly known as Bowser Jr or just Junior, is the main protagonist of the webtoon series A day with Bowser Jr. He is Bowser's only biological son, the youngest member of the Koopa family and the heir to the Koopa throne.

He is voiced by Daniel.

Nothing much is known about Bowser Jr's history, except he gained the position of heir to the Koopa throne on the day of his birth, taking it away from his brother Ludwig. A hint to the reason was proven in Two Koopas for a throne when Larry was describing what happened the day Bowser Jr was born, the hint being Princess Peach asking Bowser when they were gonna tell the rest of the children where they really came from.

Bowser Jr is characterized by generally childish qualities. He is quite immature, unaware and easy to lead into temptation. But, in the right occasions, he can be loyal towards his family, smart, brave and passionate. He can be kind of a rebel at times, for example when he escaped from the airship in response to Bowser grounding him. One of his most naive qualities is that he doesn't think before acting. However, he knows how to learn from his mistakes, and does not think twice before attempting to get even with someone he has wronged. In Two Koopas for a throne, another side of his personality is revealed, his more serious and mature side, characterized by a curiosity to learn about things beyond those that have been told to him.

Bowser Jr is averagely strong, as he is able to win in a fight with Nerdy (but not easily due to his intelligence), but can be easily beaten up by Ludwig, who's strength is above average. He also can spin inside his shell, an ability seen in Koopas in many official Mario games.

Bowser Jr has a passionate crush on Kylie Koopa, a female Koopa who he finds very attractive. He has a poster and calendar of Kylie hanged to the walls. He also has a drawing of him and Kylie together. He also seems to have a dream life with Kylie as his girlfriend/wife.

Bowser Jr first appeared in First episode(part 1), where he forgot to study for a test and asked Nerdy for the answers. They eventually got in a fight. Bowser Jr won the fight and Nerdy reluctantly gave Bowser Jr all the answers. In First episode(part 2), he got an F on the test. Bowser, his father, got angry and grounded Bowser Jr. Bowser Jr made a plan to escape. In First episode(part 3), he escaped and landed in the Mario Fan Club headquarters. He was caught by Nerdy. In Living with Nerdy(part 1), he went back to his airship, where he pressed the turbo button and crashed the airship into Nerdy's house. As a punishment, he had to live with Nerdy. In Living with Nerdy(part 2), his room got Marioed. He fought against Nerdy and defended his family, before being saved by Bowser. In Two Koopas for a throne, he was attacked by Ludwig. He wants to find out why he has the throne instead of Ludwig. In Rise of Fawful, Bowser Jr made a mistake when he thought he was talking to Kylie Koopa to tell her the code to enter the Airship, until he found out Fawful tricked him the whole time.

At the right, with Bowser knocked out

A realistic drawing of Bowser Jr and Nerdy in First episode

Bowser Jr and Nerdy glaring at each other in Mario costumes 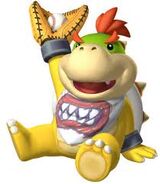 As he appears in video games 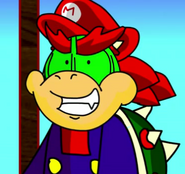 Bowser Jr in a Mario costume (without the mustache)

Community content is available under CC-BY-SA unless otherwise noted.
Advertisement