A day with Bowser Jr. Wiki
Register
Don't have an account?
Sign In
Advertisement
in: Characters that died or almost died, Male, Characters,
and 4 more

Bowser, being the father of seven Koopalings, fighting Mario

Mario, revealing his disguise, sacrificing himself

Falls into his death to spare Bowser's life.

Two Koopas for a throne part 3

Two Koopas for a throne part 3

Daniel
Morton Koopa Sr. is Bowser's brother, who also sacrificed himself to save Bowser. He is mentioned in Two Koopas for a throne where a picture is shown of him. This is what was known in part 1 about him.

Two Koopas for a throne Part 2

Morton Koopa Sr is also mentioned in part two when Bowser Jr, Lemmy, and Iggy search castle Koopa on Koopapedia and when they find the section titled Morton Koopa's death, which is the incident at castle Koopa that Bowser referred to earlier saying that if that incident at castle Koopa never happened, that the conflict between Ludwig's jealousy for the Koopa throne would never happen. It is also said on the picture of Morton Koopa's statue it says that those who never witness the statue will never know about the Koopa's true tale. What we know is... 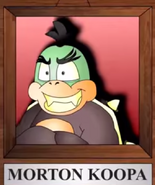 Morton shown again in two koopas for a throne part 3
Community content is available under CC-BY-SA unless otherwise noted.
Advertisement